The difference between power and influence

You’ve reached the point in your career where you feel ready for more responsibility and maybe even the opportunity to lead. You want to wield more authority over a team, which should be as simple as a title change, right?

To be the kind of leader that inspires happier teams, you need to ensure you’re focusing on influence, rather than power, to achieve strategic outcomes.

That means towing a delicate line between exerting the kind of pressure that inspires critical, creative thinking and creating a workplace that allows people to feel relaxed and confident in their abilities. The relationship between power and influence is vital to good leadership.

And because happier employees are also 12% more productive, take ten times fewer sick days and can improve sales by up to 37% 1, you need to ensure you’re on the right side of the influence, power debate. 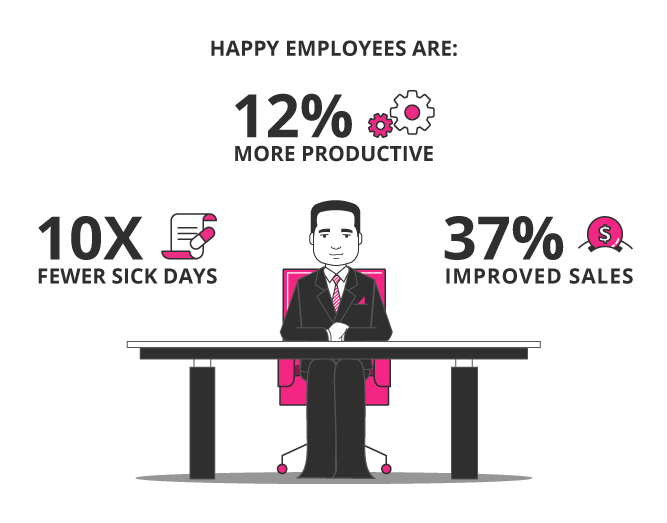 What’s the difference between power and influence?

Power and influence both refer to naturally possessed traits that follow as a consequence of authority. The difference lies in how these two approaches to leadership encourage a team to complete their work.

Power can be defined as the following: “The authority to change the behaviour of others and make them do things that they might not do otherwise.”2

The trouble with power is that, for the group, there is no alternative but to comply – which means that power is often achieved through fear or coercion.

On the other hand, influence is defined as: “the ability to alter other people’s perceptions of a situation.”3 Unlike power, influence makes use of positive language and subtle behaviours to encourage the desired outcome.

Power forces people to complete a task, where influence helps them understand why that task is necessary.

Here is a list of the fundamental differences between power and influence:

1. Power is forced while influence is voluntary

Power relies heavily on forcing team members to do something through the use of threats, whether they’re implied or explicit. Intimidation is achieved by creating the belief that if an employee does not comply, they will face punishment – whether that means being fired, losing out on a promotion or being berated in a public space. This kind of negative leadership can create the feeling amongst team members that they have no choice but to do things a certain way.

Influence leads to an entirely voluntary approach to completing work. Through the use of positive affirmations and encouragement, influence results in the team feeling that they have a choice in both the work they’re required to complete as well as the means they take to get it done. Threats are traded in for persuasion and negotiation to allow employees more control over the work they’re doing.

2. Power is undemocratic while influence focuses on the team

Power remains in the hands of one person, or a small group. This independent approach to leadership means that the team is not consulted during the decision-making process, and are often micromanaged to ensure that the leader’s methods are upheld. This undemocratic response to leadership removes a sense of responsibility from the team, decreasing morale.

Influence understands that teamwork is a dependent process: the team is dependent on their leader for guidance and the leader is dependent on employees to produce excellent work. As a result, there is a shift from autocratic decision-making to an emphasis on transparency and getting the team involved at various stages of a project’s inception. This approach means that team members feel valued, and as a result, produce work that reflects that.

Power is exerted by leaders who enjoy a sense of hierarchy in their organisation. That hierarchy is most apparent in the way in which teams communicate. When only a powerful leader is present, teams will be talked down to through orders and instruction. This results in ambiguity and unclear expectations, as there is little room for asking questions or giving feedback. Transparency is not valued in leadership that depends on power and, as a result, employees can become disengaged.

Influence is concerned with the thoughts and feedback of the group. Influential leaders encourage straightforward conversation where processes can be improved and creative ideas are pushed forward. This approach to leadership fosters trust and relies on negotiation to make team members feel valued and heard. Influence does not do well in systems of hierarchy.

4. Power can cost a business money while influence improves retention

Power in the United States alone, only 32.6% of employees are engaged at work, which can cost a business up to $550 billion a year.4 This is the result of unhappy employees who are less likely to feel a sense of loyalty to their organisation and are more likely to hand in their letter of resignation. The consequences of bad leadership are not just social or emotional – a business’s bottom line can directly be affected.

Influence 46% of HR specialists say that retention is their biggest challenge when it comes to staff concerns.5 Influence boosts engagement in staff because they feel personally invested in the work they’re creating. This is coupled with the fact that exerting influence as a leader is inexpensive – it focuses on soft skills that can be learnt and practised and doesn’t require additional resources.

To be a better leader, you need to invest in your team but also in your own skill set.

Find out more about the online short courses on offer that can help you differentiate yourself in the workplace.

The Great Career Reset: Pivoting From a Career Plan to a Skills Plan Read More