How Will Brexit Affect Your Business?

Since the announcement of the UK’s decision to leave the European Union (EU) last year, citizens, politicians and business leaders in the UK, EU and rest of the world have been have been considering what this might mean for them.

Conversations about what’s next for your business, your job, and the potential terms for the future relationship between the UK and EU are commonplace and the looming threat of the impact Brexit will have on the world economy is ever-pressing.

In 2017, the UK has seen increasing employment rates and steady job creation coupled with a significant decrease in the growth of the economy – now sitting as the slowest growing economy of all major western countries.1

This apparent paradox has caused a degree of uncertainty about what Brexit holds for the future of both the UK and EU economies.

But what does Brexit mean for you and your country’s economy? How will Brexit affect your business? 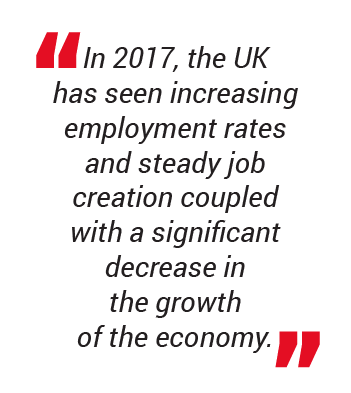 Whether you’re a German investor in UK companies, a French worker based in London, a multinational manufacturer with a supply chain across the UK and EU, or a British farmer with a large EU migrant workforce – the effects of Brexit will have a significant impact on your business.

Global events creating ripple effects, such as this, is one of the reasons the London School of Economics and Political Science began the development of the Business, International Relations and the Political Economy online certificate course, in collaboration with GetSmarter. The course will provide business leaders who are affected by the decisions politicians make – in their own countries and abroad – with the foresight to mitigate the potential risks attached to significant global political, social, and economic events.

Here are some of the ways Brexit will affect business:

What Brexit will mean for investment banks and the financial sector

It’s clear that London financial sector will be hardhit, with estimates suggesting a 12 to 18 per cent loss of revenue and 7 to 8 per cent drop in employment.3 But who will benefit as a result? The following three destinations will likely house the newly relocated investment banking jobs:

Warsaw in Poland will also likely benefit as an attractive destination for financial outsourcing, and a potential 35,000 jobs in the sector will be created by the end of 2017.4 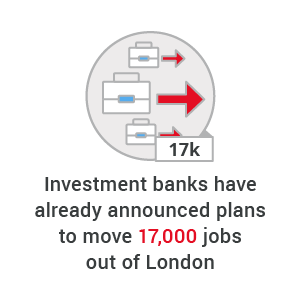 What Brexit will mean for international traders

When the UK joined the EU in 1973, it marked the last time the country would have to negotiate a trade deal – until now. The result of the Brexit decision means that, for the first time in 44 years, the UK will have to sign 295 trade agreements if it wants to retain its current trading relationships.5

Around half of UK imports and exports of goods and services are with the EU, which is the biggest market for all major sectors of the UK economy. The UK and EU are now negotiating their future trading relationship post-March 2019 and this will determine the tariff and regulatory basis for UK-EU trade, as well the length and scope of any transition period.

Supporters of Brexit argue that being outside the EU will enable the UK to develop new agreements with the US and high growth economies in the rest of the world, in particular China, India and the Commonwealth. The ability to finalise trade agreements with other countries will only become a reality once the UK has left the EU officially, and agreements will also be required with countries who already have a trading agreement with the EU. These will all take time, but it is possible the UK’s trading relationships with Europe and the rest of the world will experience significant change over the coming decade.

What Brexit will mean for British business leaders

For the C-suite executives of British business, Brexit has been particularly stressful. The Confederation of British Industry (CBI) conducted a recent survey and uncovered that 42 per cent of companies reported that the decision for Britain to leave the EU had already affected their investment decisions.6

The Brexit decision has brought with it a terrifying prospect for business leaders: uncertainty. And that uncertainty can only be met with one viable solution: a contingency plan. The expected date of British departure from the EU is set for early 2019 and decisions need to be made for companies that might have to secure their foreign work forces, or move their operations to other countries.

Business leaders with operations or relationships in the UK need to develop their own contingency plan by predicting what the departure could mean for their specific business needs.

Currently, migrants make up 14 per cent of the UK workforce and of that 14 per cent, 5 per cent are EU nationals.7

So what does Brexit mean for those EU migrants based in the UK? 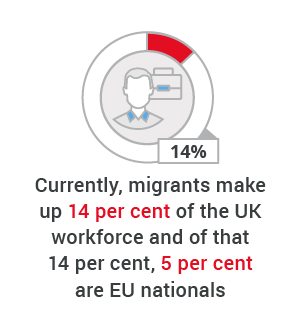 If the UK is to depart the EU, most EU migrant workers will be presented with the opportunity to stay and obtain British citizenship. The real concern is future hiring and how to maintain a robust workforce. Currently, non-EU work visas are awarded to those with specialised skills and it is likely that, after departure, EU work visas will follow suit. This means that for those with high-skilled qualifications, the outcomes are still positive for work in the UK.

But the reality of the situation is that it’s the low-wage, low-skill sectors that rely most heavily on EU workers, and those with higher turnover rates, will be most significantly affected. The meat processing industry’s workforce is 43 per cent EU migrants, and the hotel industry sits at 23 per cent. These two industries, amongst others, also have hiring rates of 10 and 30 per cent respectively and are most likely to be anxious about their ability to hire a consistent workforce.8

Interested in giving yourself the necessary tools to navigate the disruptions Brexit – or other geopolitical events – might bring your business?

Find out more about the LSE Business, International Relations and the Political Economy online certificate course.

Employee Training and Development: The Benefits of Upskilling or Reskilling Your Team Read More